During the back to school season, I always get a feeling of melancholy. Going back to school after a summer break was a big deal! My favorite part was getting new “tennis” shoes. Some people may call them athletic shoes, or sneakers. I believe it depends on where you are from as to what you call them. It’s kind of like, do you say soda, cola, or pop. Most of us born and raised in Southwest Virginia call our athletic shoe tennis shoes and it doesn’t matter that some of us have never played tennis in our lives.
So, with new white Nikes or Reeboks and my new Levi’s that were so stiff, they could walk to the bus stop by themselves. I would make my way through the halls, stopping to catch up with my friends, finding out your schedule, your teachers, your homeroom, where your friend would be and of course your crush.
My teachers left such impressions on me there are things that I do in my classroom today that is a direct result of my teachers. My wish is to impact children in ways that hopefully stimulate lots of thinking and challenges them to step outside of the box.
We have completely conquered counting aloud in Spanish and are now learning to count in Japanese! It is great fun and the children enjoy it so much. This is an activity we do during transition times throughout the day. Transitions are the toughest part of a toddler and/or preschooler’s day. Adding signals or cues make transitions so much easier for all of us, plus it is a fun thing to do.
Our fairy garden is another huge success for us!

Miss Amy found some nice galvanized trays. We then added some aquarium gravel. Then we put in some potting soil. Next, we spread the grass seed/mulch mixture and watered it. The children found some really great decorations and ornaments to go inside.

They chose objects that they felt may attract friendly fairy’s and then they waited….and waited….and waited some more. At last, we saw the first signs of bright green grass. That is when Miss Amy thought a ‘grow light’ may come in handy and how right she was. WOW! What a difference a day made. We now have a beautiful lush grass so thick and long that Miss Stephanie had to give it a ‘hair-cut’. 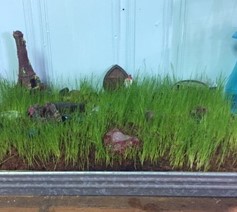 We have been busy, busy, busy…We even made, and ate, Purple Stew!

If you have been following our blog then you know that this is our most favorite song and dance. You can find it on YouTube GoNoodle Purple Stew. The recipe is rather simple; It contains purple potatoes, purple carrots, purple onions, purple cabbage, a couple of beets, corned beef hash, some V-8 juice, and little bit of blue food coloring. Viola! Purple Stew! We all liked making it and most everyone enjoyed eating it.
Back to school season is a time of renewal and reflection. I’m excited to begin the process and build new relationships. I am very proud to watch a few students graduate to the older classrooms upstairs and spread their wings a little. I fondly remember a teacher that let us go for a walk and brought in exotic fruits and vegetables for us to taste. The teacher that encouraged u to make a big mess and sing a little louder. So maybe this is why I always “need” a new pair of “tennis” shoes every August and why I now like “soft distressed” jeans rather than those 505’s that could stand alone.

Until next time ~ Miss Micha

So Miss Amy and I took only the children who were going to kindergarten to the Colonial Trade Fair at the Virginia Highlands Festival. Since all of my girls were out we took eight boys. The  Trade Fair camp is being held at the Fields Penn house until the end of the festival. 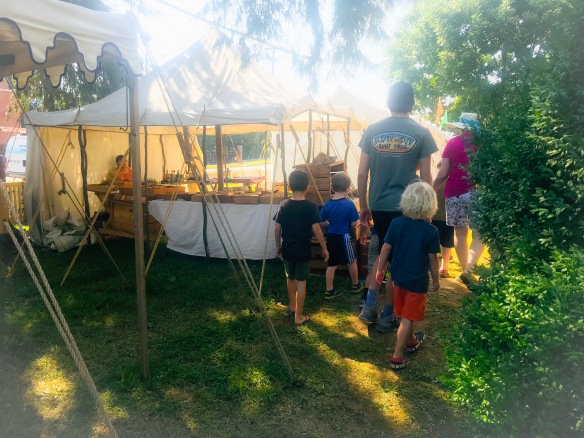 Off on an adventure

It was actually perfect because they were really into the weaponry part of it. We met a nice lady named Stephanie Foster who makes cording and gave each of the boys a coin and showed us her camp, the gentleman with her showed us his outfit and hat.

He’s not fooling us, he’s a pirate.

The boys really loved the hat and insisted he was a pirate even though he told them several times he was not. 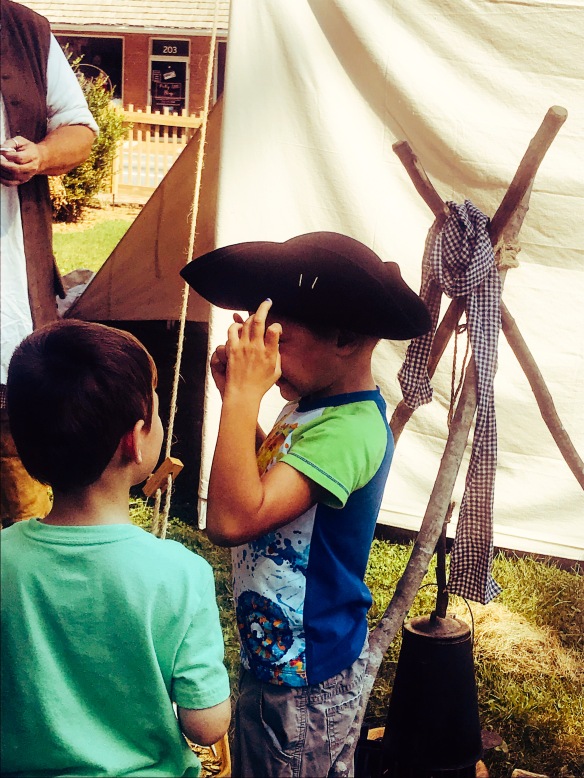 This colonial hat would make a great pirate hat.

We also met a couple and their daughter at the Knight Miners tent. They were from Georgia. The boys really loved their tent because they had megalodon teeth. They also enjoyed the “crystals” aka quartz they were selling and the handmade onyx knives. They had several oddities as well like animal bones, skulls, porcupine quills, and shark jaws.

Tell Miss Amy not to touch 😀

Miss Amy picked up a shark jaw and a tooth fell out, Abe screamed: “Oh no! I hope you have money to pay for this, you break it you buy it!”. Luckily the Knight family was very understanding. Their daughter also had her own tent of wares which I thought was very cool, and it was a favorite of the boys because it had tumbled rocks, crystals, arrowheads, sea glass, marbles, and fools gold.

What sort of magic lies in there?

They are all such magpies that they wanted to look through and touch everything! A few of the boys noticed that they also had pet rabbits with them. Jillian explained that they were pets, but their babies would be for food and they had already taught their daughter how to harvest them, and she can do it all herself. They also have a full farm back in Georgia where they harvest a lot of their own animals.

The last tent we went to sold wooden toys and various handmade items. Larry and Shelia Ard are from Indiana, and they are an older couple, but really enjoyed having the boys running around exploring everything. 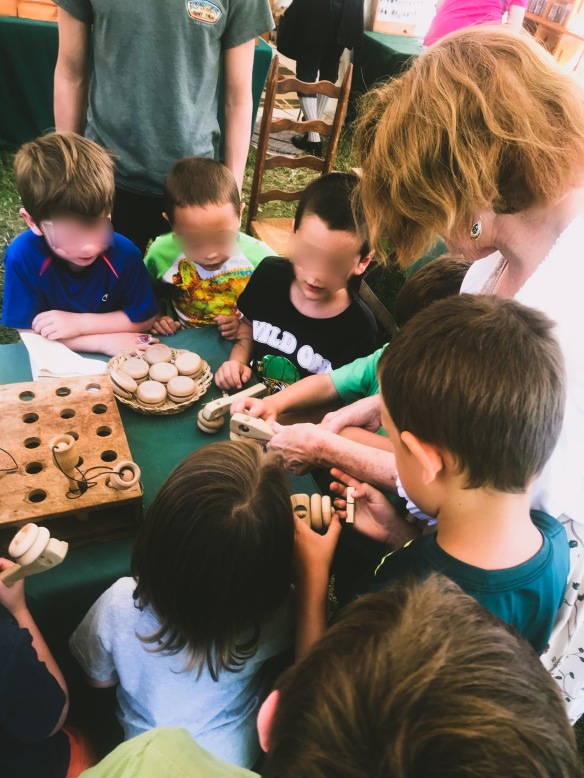 They have lots of puzzles and games too!

They showed us how to use toys like tops and yoyos. Larry even showed them how to shoot a bow and arrow.   They also let all the boys sample some maple candy. There were several bugs crawling around in the outdoor tent and they spent a long time explaining how important spiders and honey bees are to our planet which I thought was very nice.

Thanks for the wonderful time! Till we meet again, sir.

As a going-away present, we bought several worry dolls from the Ards to get rid of those kindergarten fears.  ~ Miss Amber